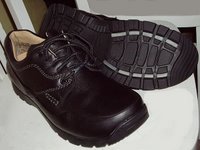 I got some new shoes yesterday, 'Clarks Show Low GTX, Activ Air', to replace my work shoes. (For some reason, people think spelling words like active incorrectly as 'Activ', makes a product "cool".) My previous shoes lasted about 2 years, and were from Clarks, they don't do the same shoe anymore so I've had to get some different ones*. I'm not sure how long they'll last though, and thought it would be good to blog about it then I have a record of it. 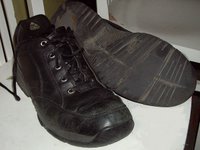 The last time I had to buy new shoes, I ended up returning about 3 pairs before I got some that lasted, I bought some initially from Next, they broke, then some from George (Asda), they broke, then some cheap ones from Clarks, they broke, then finally I got some expensive (£60) shoes from Clarks that were a lot like trainers, with big squishy soles, and "activ air", which apparently makes them better for your feet. They lasted about 2 years, but I'm not 100% sure because I have no record of when I bought them. The new shoes have goretex (breathable apparently), and "activ air" soles, and look more business shoe like than the previous ones, but they also have BIG chunky soles, which is good because it was the soles of the last shoes that wore out.

I do IT support and I often have to do annoying things that require flexible shoes, and my last pair were great for this as they had bendy flexible soles, the downside is that meant the soles wore out quicker than I would have liked. The new shoes may not be as flexible but I'm sure they'll be okay, and the less-bendy-ness is worth it especially if the shoes last much longer. The thing that makes all this all the more sweet an experience, is that the new shoes were reduced from £70 to £40! Hooray! Life is full of bitter sweet. 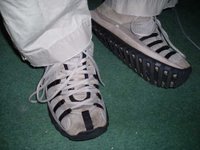 * This reminds me of a very bitter (sweet) tale regarding trainers. When I was about 17/18, I bought some awesome adidas trainers, they were just perfect, comfortable, stylish, good grip. But eventually when I was around 20, I had to get rid of them, they had holes in them, and at the time, Liverpool was a very rainy place, but I simply couldn't find anywhere that sold the same trainers, adidas in their continuous effort to create new more stylish designs had completely stopped doing anything like it. However, the sweet part of this story is that I ended up with some excellent Stride(?) trainers - whilst they were never as comfortable as the adidas trainers, they did trump them quite substantially, (Top Trumps based on trainers?), in that they are still around today, 6 years later I still wear these trainers, their massive chunky soles having lasted exceptionally well.

Related Links: Visit Clarks annoying flash website so you can spend all your time looking at flashing text saying "Loading..." every time it wants to display an image, and everytime you click something, even when you click the 'contact us' button to complain about their website! And where's the flipping search box or button!?!? Have they even tried to use their own website?!?

Adidas - quick loading website. they even sell customised trainers at sweatshop.co.uk - hmmm, I wonder if they spot the irony?

And because I can't find a Stride trainers / shoes website, why not visit StrideOnline - an awesome 90s style rock band.

Anonymous said…
Hey. I too have a 6 year old pair of Strides. Massive blue suede things with clumpy (lurch-style) soles with silly things written on the bottom. Also have a pair in red, white and blue that were awesome in a clowny kind of way. Been trying to find some myself for ages but reckon they must have gone bust at some point. Shame - no-one else makes such stylish ts these days. Good luck in your search.
1:41 PM

Anonymous said…
Gah, i too LOVED stride trainers - they were frecking wicked. i had a great white pair that looked and felt like a dolphins head...

Still miss them. i left them out in a car park on my skateboard one night and in the morning they were gone but the skateboard remained. Never seen any in shops ever again.

BTW mine were actually called 'sudo' trainers - they were EXACTLY the same as stride and am SURE they were the same company, but that was prob there name before they were imported.

I still trawl ebay just incase some new old stock end up on there one day.
5:54 PM

Come on - there must be a stockroom stash of these somewhere waiting to be unearthed!
2:49 PM