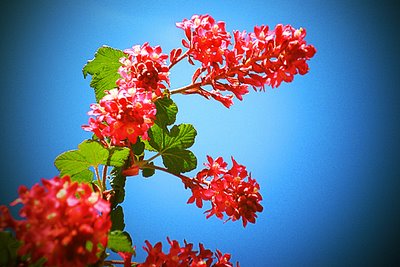 Here's a "Lomoesque" photo - it was taken with the Sony Cybershot DSC-L1 and edited with Photoshop (here's the original). The L1 is a great little camera that I can take with me everywhere I go, I especially like the generally high saturation the photos have. Unfortunately photos have lens-flare more often than I'd like.

Anyway, on the subject of "Digital Lomo", there are numerous Photoshop Actions* that are supposed to provide a digital equivalent to the Lomo camera, but in my opinion, it's not possible to produce one set action or process that produces the same results as a real Lomo LC-A. Lomo photos tend to be more random, one photo may come out looking like a normal camera has taken it, whereas another will have a large yellow area, and another will show a very small depth of field, another photo will have vignetting, another lots of lens flare. Digital photos all tend to be the wrong aspect ratio to start with (4:3 instead of 3:2), and often, despite all the hoo-ha about noise, have less noise than photos taken with film, and will consistantly produce the same results over and over again, with a Lomo, the results are much more random, changing each time you use a different film. If you are intending to re-create the "Lomo-look" with digital, then I'd recommend taking the time to edit each photo individually so that the results are different from photo to photo, rather than all photos having the same action applied. Another option is to make your own Digital Lomo!

* This site's Photoshop Actions are particularly good, as it recommends you take control of how much you change the image.