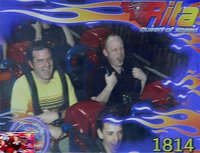 We went to Alton Towers yesturday, unfortunately, Heather had the car so I wasn't able to drive down in it. I went with Tony, in his car. He wasn't so keen on the second ride we went on: Rita Queen of Speed, as you can probably tell from the picture! It is VERY fast, and very scary. Later I went on Nemesis and it felt quite tame in comparison. For some reason it didn't take a photo of me! Hex was good but confusing, definitely worth going on, but I felt it could have been better. The Haunted House was a good adaption of the usual haunted house with guns, but nothing spectacular. 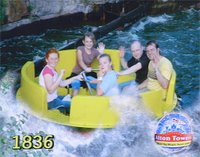 Tony's favourite ride was the rapids, even if it did involve getting wet. I like it a lot too, the big rotating platform used to board is very cool. They had a new ride called Peugeot Driving School - unfortunately it was for kids! We wondered whether it was sponsored by Peugeot, I thought it might be, however it might just be a really weird coincidence, what with all the Peugeot 207's dotted around the Theme Park. Below, Left: Tony and me on the River Rapids. Below, Right: Tony and me on the see-saw ride (The Blade). 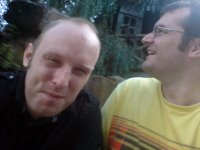 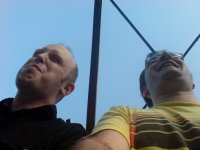