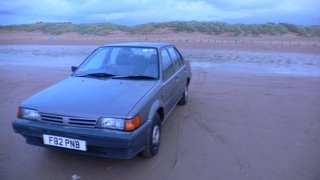 We went to Ainsdale beach today (because we were told you can drive on it), which is just a bit past Formby, and just after the "Welcome to Southport" sign you turn left (at the lights), thankfully there's a sign, and you just keep going on that road, and sooner than you think, you're actually driving on the beach. (It's too late in the day to worry about grammer and tenses)

You don't get to drive on the beach free willy style, you're penned into a very large car park that's on the beach, so it's good enough if you just want to have a quick go on the beach, and near sunset there weren't too many people around. Although there is a 10 mph speed limit. There are scary signs saying you're not allowed past the car park and that they'll conviscate your car if they catch you out of the car park, so unfortunately it looks like you need to find some other beach if you want real freedom.

The picture's of "our sunny" on the beach car park. (it was taken at 4.45pm, just before it got dark, and there's heaps of noise as I took it as ISO200, which I think I'll have to avoid with this camera - the Panasonic LX1)