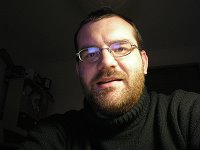 Well, you know how digital cameras always put IMG, or PICT, or DSC in front of the numbers, ie: IMG00001.JPG, well here's some clever links to all the image naming conventions for digital cameras so that you can find completely random photos taken by a specific camera. Whilst that may seem pointless, but fun, it's worth knowing in case you're ever wondering what brand of camera someone has. (Which I do because I'm quite sad like that, for example, I guessed that planetdan.net uses a Canon, and now I know I'm right because all the images start with IMG!) Olympus are slightly more complicated in that they start with P, and then use the month, day, and then the image number - but it's useful if you want to search for photos taken on a specific day or month! Fun to be had, for sure! that's where I ended up after searching for images with the same name as the photo of me. Here's what I found. (The photo of me was taken with the new Olympus FE-120 / X-700 with one of it's many scene modes, expect a review on digicamreview soon).

We're off to see the latest Harry Potter film tonight, at a late night showing! Whilst I'm really chuffed we've managed to find a late night showing in Liverpool, (as previously we were disapointed when we thought they didn't exist here), I'm beginning to think that maybe my tired body would prefer to sleep sooner rather than later!

You might notice, I've added a link to Pandora on the right there, well I gotta say, I absolutely love it! You start of with some band or bands you like, then as you go along listening to music it suggests, you give music the thumbs up or thumbs down, which is just excellent, you can end up listening to some crazy punk rock thrash metal one minute, then later if you're feeling tamer, give that stuff the thumbs down and end up in another direction!