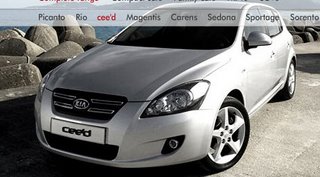 7 years / 100,000 mile warranty (on powertrain, 5 years / 100,000 miles on the rest of the car). WOW! Yet it's the same price / or less than a Toyota Auris (Corolla), Ford Fiesta, Honda Civic. Plus it looks better than the so called "revolutionary" Auris (The Corolla replacement that has been rated as worse than the car it replaces by What Car) It even looks fairly decent from the back (although admittedly all cars look the same these days*). I wonder whether you can happily keep the same car for 7 years, or whether boredom would set in, and you'd want to replace it with something else? Think of the cost savings compared to other cars though: "The car's broken" Kia: "No worries, we'll fix it for free!".

OR perhaps a better way to save money would be to buy a Skoda Fabia (From £7000 for the old one, and £8000 for the new style) - with "Superminis" constantly getting bigger, do we really need a medium sized hatchback? The old Skoda Fabia was already the same size or bigger than the original VW Golf, and the new Fabia's even bigger. Alternatively, perhaps, a Renault Dacia Logan would be cheaper, €5000 in Europe, or £6000(!!??!!) in the UK in Summer 08!

* Is it just me, or does the front of all these cars look identical: Toyota Corolla, Kia Cee'd, Hyundai Accent etc?

Anonymous said…
The car is really great. The most important for me is surprisingly good quality which wasn't even average in previous kia models. I have tested many C cars (focus, auris, civic, astra, golf) and my choice is civic or ceed. Civic is prettier than others (in my op) but is much more expensive. It is not audi a3 (my current car) of course but it is just perfect for my mother.
Whats more - beware of toyota. It is produced in Turkey and its quality suffered badly.
12:16 PM

Anonymous said…
The Kia is a very nice car it is a good value for money foe what you get I am sure it will do well against the other UK competitors, I used to own a Vauxhall but Vauxhall spare parts are expensive as most other makes Kia parts are surprisingly relatively affordable.
2:24 PM