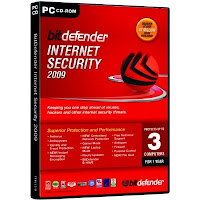 BitDefender Internet Security 2009 (£25 from Amazon UK) goes a little bit further than most anti-virus software, however it also adds parental control so that you can make sure your children aren't visiting dodgy websites.

When installing it notified me that a newer version was available and asked me if I wanted to download it - this extends the install time - however you may as well have the latest version if you're in no rush. Once downloaded, the install took roughly 4 minutes (excluding download time) and required a restart after installing. I installed it on a Vista SP1 laptop.

BitDefender Parental Controls - this provides internet blocking - and has three basic settings based on user accounts - for example you could setup Erik as "Teenager", John as "Child" and yourself as "Adult". The teenager setting seems overly protective, blocking sites such as www.blogger.com unless you allow it. In advanced settings you can limit the time the user spends on the internet. It seems a little bit basic, but looks like it would do the job in a home environment.

Using the program can be a little confusing - it starts in easy mode - but the number of options and features makes it a little complicated simply due to how many options there are. Switching to the advanced mode only increases the confusion, however, it can be needed when you want to double check how features have been setup.

If you want backup features then I'd save money go for Bullguard or if you want parental controls then you could go for Kaspersky instead - both of these are cheaper and in my opinion have a better user interface.

Update: Over an extended period, the programs problems tend to surface. Often I'll come back to the computer and find an error message from BitDefender asking me to report the problem without even knowing what the problem is. The program told me about several issues and clicking "Fix this issue" did not work, over time more issues appeared, and did not go away. The internet filtering is set to "Teenager" is excessively strict, blocking even websites like Amazon or Sainsburys to start with. After using this for about a month, I wouldn't recommend it.