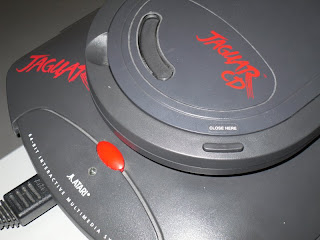 
Here you can read my atari jaguar reviews, with a rating out of ten.  it's about how much i like the game.  they are all personal opinion.  i have been silly enough to do them in alphabetical order!

Alien vs. Predator - 6/10 - 94 - this one's ok. people were buying the jag for this game when it first came out [so i was told!].  a lot of atmosphere, and quite freaky sometimes, especially when you're being chased by a predator, and about 10 aliens! argh! slightly slow frame rate.

Bubsy (the bobcat) (new Jan 07) - something something (perils in peri peri land or something like that - actually: "Bubsy in fractured furry tails"). sideways scrolling platform game. jump and collect things (like sonic the hedgehog) - back in the early 90s everyone thought you had to have a "sonic the hedgehog" or "mario brothers" platform game on your computer / console otherwise you had to hang your head in shame as a complete failure. hence "zool" on the amiga and atari st, and "bubsy" on the jaguar. (although see rayman). quite good - similar to sonic, but you collect cheese and you can fly. pleasantly colourful - fairly tricky 5 - 6 / 10.

Brutal sports football - 5/10 - new 2/apr/01 - 94 - 2pl - another average jag game, this time on a football pitch (american football).  a cheesy, almost impressive telegames intro. the game has ok-ish music, and ok-ish graphics, it's sort of ok.  it's very basic as the pitch is a big graphic, none of that clever parallax stuff you see in other football games, and the scrolling is just not smooth.

Checkered flag - 4/10 - 94 - atari's answer to sega's virtua racing i guess.  it's okay / quite bad definitely not brilliant. slow and hard to control. very slow frame rate wise - and worse than the excellent Geoff Crammond game on the Atari ST.

- 6/10 - 94 - better than the PC version, probably worse than a lot of other versions. (some people say it's the best version ever made, but I'm not convinced)

Dragon - the bruce lee story - 4/10 - new 27/mar/01 - 94 - 2pl - not that great. music ok, fast game, with all the usual parallax scrolling effects we've seen on the Snes version of Street Fighter 2.  Not very good graphics, all very 2D, and not that much fun to play, got annoying after about 20 minutes!  Have not tried this in 2 player mode, maybe it'll be better then, I doubt it though. graphics look very much like Street Fighter 1 on the Atari ST. It's very fast and reminds me of IK+ ever so slightly but nowhere near as good.

Double Dragon V "The Shadow Falls" - I expected this to be similar to earlier Double Dragon games - sideways scrolling story based game where you beat people up - but this one's just like Street Fighter 2 and all the other Atari Jaguar fighting games - disappointing. 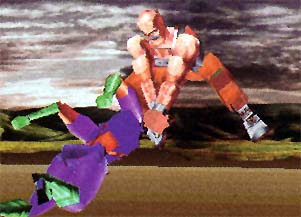 6/10 - 95 - 2pl - erm. tekken clone. texture mapped in places. took ages for them to release this because they were going to release it without texture mapping and i think everyone said it would be completely pants if they didn't have texture mapping. so it finally got released with texture mapped people.  and it's okay.  it's got a good demo! here are some screenshots...  (on the left) If you push your opponant out of the ring they get electrocuted to death! 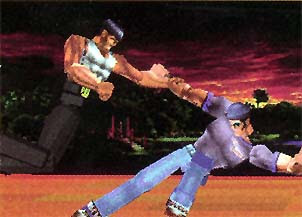 Iron soldier - ?/10 - 94 - haven't played it enough to get into it.  looks quite good though.  and people went on about it a lot at the time. so it must be good. you are a giant metal robot and have to fight tanks, helicopters, jet planes, missiles etc and have numerous missions to take part in. similar I guess to Robocop 3 on the Atari ST in regards to 3D (untextured) graphics, but with more detail, and 3D explosions.

I WAR - I-WAR on Amazon.com


Kasumi ninja - 6/10 - 94 - 2pl - quite a lot of fun. fighting.  funny too, e.g. the scottish guy shoots fire out of his kilt!!  This one's supposed to be Mortal Kombat but on the Jag, it's got lots of blood but where's the ripping peoples heads off etc? good graphics - bigger sprites than "ultra vortek" - quite difficult.

Missile command 3D - new oct 08 - full: Missle Command 3D. "This I guess would almost be considered a fully featured "64bit" game for the Atari Jaguar - using 3D objects - some with texture mapping and a 3 dimensional environment. The game has three modes - an original Missile Command - with changeable background (choose from a default wallpaper, atari lynx, arcade, or tv set), a 3D Missile command - an updated version of the original but in 3D, and then a "Virtual" Missile Command - which is set under water and is first person - you can fire from one of the cannon towers (at a time), and must protect the houses, other towers and yourself. The game has some horribly irritating background menu music. I prefer the original version of this - seems the quickest - most fun and most playable."

Pinball fantasies - 4/10 - 94 - just like the one on the amiga. absolutely no point this game being on the jag.

Power drive rally. overhead (micro machines style) rally game, like on the 16 bit Sega Mega Drive. you can buy a car then pay to repair it after the event. 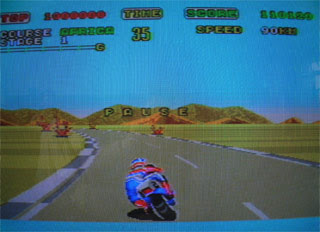 - very quick bike racing game, sprites moving quickly towards you, remember someone saying that it runs at 60fps, can believe that, quite good fun for a dated game. like a 16bit game on steroids. worth seeing in action. there's a youtube video here. 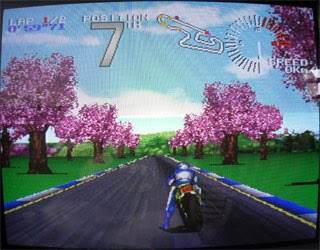 Supercross 3D - 3/10 - 95 - another seriously rubbish game.  dirt bikes.  bad graphics.  and bad playability.  perhaps if i played it more it might turn out okay?

Theme park - 6/10 - new 20/mar/01 - 94 - 1pl - very addictive when you get into it [i played for about 5 hours non stop today! so that shows you how addictive it is]. a wee bit slow, and not very spectacular for a jag game, but fun nevertheless, you might call it a wee bit boring because of it being slow.

Trevor mcfur in the crescent galaxy - new oct 08 - quite an entertaining shoot em up, seems quite basic but has fairly big end level baddies that appear to have been raytraced with something more powerful...

Val d'isere Skiing and Snowboarding - (new Jan 07) - if you're expecting some kind of 3D "Virtual Reality" style game then you'll be sorely dissappointed (like I was) when you realise that it's nothing more than Super Burnout on snow. If however, you like Super Burnout, then you might like this game, as it's very very fast and in your face. okay - good (5/10) expected more.


Baldies - overhead puzzle game where you move bald men around. you start on an island and eventually build land over to another island, invent some weapon and kill the other men on the other island. Quite good fun, but a bit slow, and not especially colourful.


Battlemorph - sequel to Cybermorph - but they've switched on texture mapping.


Blue Lightning - another flying through badly pixellated clouds / bitmaps game. Uses the CD to play good looking videos of a 3D game, except you never get to play it... video on youtube looks quite good with rocks and buildings, but so far I've only played the clouds.


Vid Grid - puzzle game using MTV style music videos - rearrange till it looks okay, then you get to watch a fairly low resolution video of the music. video on youtube.


You put an audio CD in, press play, and lots and lots of pretty colours wibble all over the screen in time to the music - it was the inspiration for the first every VLM on the PC, as featured in Winamp. Apparently there are 81 different effects, and two main modes, VLM, and VLM R? Youtube videos: here, here. The JagCD can be hacked to edit the effects, or alternatively you can add an audio in port so that you could use the VLM live.

hmmm... where are all the 3D Virtual Reality, next generation games, that you'd expect on a "next generation" console (ie the generation after the 16-bit SNES and Megadrive)? The console seems limited by the number of buttons on the controller, yes it has a 12 button keypad, but surely a left / right top button, and a second row of C B A buttons (like the Sega Megadrive) would be more useful.


Best Games for the Atari Jaguar?


Doom - very good, no music, makes it quite scary at night.


?Attack of the Mutant Penguins looks awesome (video with swearing) - part 1 is here if you're interested. (although I've not played the game)


erm that is all i have.  i would like more games as long as they are cheap.  also i wouldn't mind a cd-unit plus any other stuff i can get. cheap.  please email me at goshwa at hot mail dot com if you have any games available or would just like to send me some feedback. originally on jillajang, but now here and updated.