June 26, 2020
There are so many episodes of Grey's Anatomy, there's bound to be some stinkers. So obviously, the musical episode where they're all singing, is downright awful. But there are more. Here we go, in no particular order: 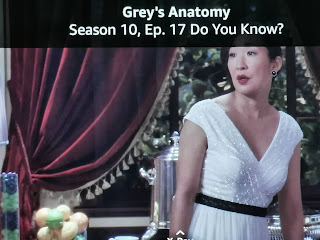 Season 10, Episode 17 - Do you know? (how terrible this episode is?) An annoying "flash forward" episode, what would happen if... but each flash forward is so long and boring you want to skip through it and literally fast forward through it. The timeline is just mixed up, mixed together, so what is / isn't real, who knows? Who even cares? What's most frustrating is the (no longer believable) relationship between Yang and Hunt, which has been done to death already. Talk about flogging a dead horse. "Same same, over and over" Yang says JUST LIKE THIS EPISODE.

Season 8, Episode 13 - If/Then - The other earlier "what if" episode that was the "opposites" episode, which I just skipped completely because it was complete *insert expletive of choice here* horse manure.

Season 7, Episode 18 - Song beneath the song. Horrible. Horrid. Terrible. PAINFUL to watch. A musical episode, where everyone can sing perfectly (or at least very well), and the whole episode is a (terrible) musical.

Season 8, Episode 24 - This is a difficult episode, if you've seen it, you'll know why. Then the following several episodes are quite painful to watch because of who else leaves the series. The way it is done in the following episodes is particularly annoying as well. You find out someone is dead, then they flashback to the run-up to them dying.

There are bound to be more, that I'll add, as and when. There will also be the episodes that I've just completely forgotten due to sheer boredom.

June 24, 2007
1996 - Dave Mustaine got together with Lee Ving (Voice, Harmonica, Lyrics), Kelly Lemieux (Bass), Jimmy DeGrasso (Drums) and played Guitar and wrote lyrics to record the album called MD.45 - The Craving, creating a "punk metal record". It was at a time when Dave was unhappy with what Megadeth were doing (Cryptic Writings, Risk). Musically great, however, fans of Megadeth / Dave Mustaine, were somewhat disappointed with the vocals. Fast forward to 2004 - Dave Mustaine is remixing and remastering all his albums, one of them is MD.45 - The Craving. Unfortunately half the recording (Vocals, Harmonica) was recorded in a different studio, which had since shut. Unable to remix / remaster from the original recordings, Dave Mustaine decided to re-record the vocals and harmonica by singing himself and simulating the harmonica parts on guitar. MD.45 The Craving - Dave Mustaine Vocals (2004 Remastered) - Fans of Megadeth will enjoy this album. I listened to the original '96 v
Post a Comment
Read more